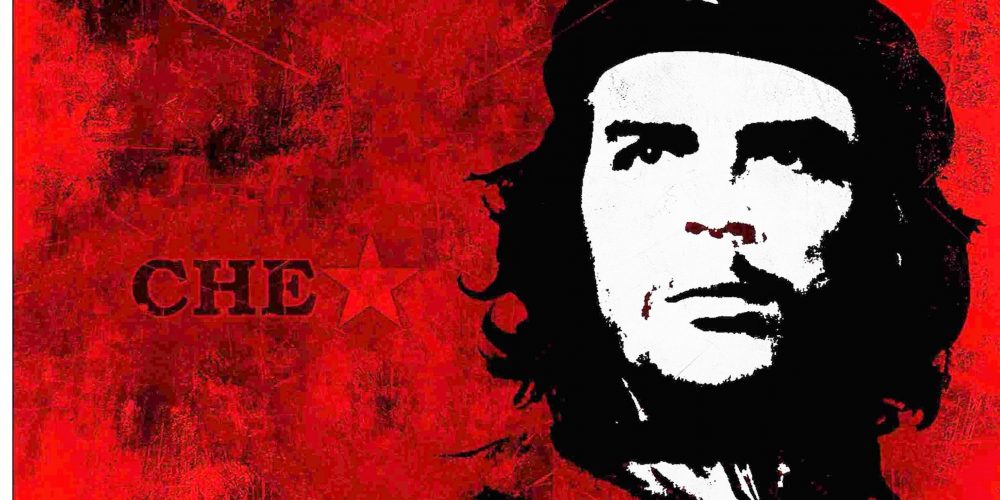 Che Guevara was an Argentinean-born, Cuban revolutionary leader who became a left-wing hero. A photograph of him by Alberto Korda became an iconic image of the 20th century.

Ernesto Guevara de la Serna, known as Che Guevara, was born on 14 June 1928 in Rosario, Argentina into a middle-class family. He studied medicine at Buenos Aires University and during this time travelled widely in South and Central America. The widespread poverty and oppression he witnessed, fused with his interest in Marxism, convinced him that the only solution to South and Central America’s problems was armed revolution.

As an young medical student, Guevara traveled throughout South America and was radicalized by the poverty, hunger and disease he witnessed. His burgeoning desire to help overturn what he saw as the capitalist exploitation of Latin America, by the United States prompted his involvement in Guatemala’s social reforms under President Jacobo Árbenz, whose eventual CIA-assisted overthrow at the behest of the United Fruit Company solidified Guevara’s political ideology. Later in Mexico City, Guevara met Raúl and Fidel Castro, joined their 26th of July Movement and sailed to Cuba aboard the yacht Granma with the intention of overthrowing U.S.-backed Cuban dictator Fulgencio Batista.  Guevara soon rose to prominence among the insurgents, was promoted to second in command and played a pivotal role in the victorious two-year guerrilla campaign that deposed the Batista regime.

Castro overthrew Batista in 1959 and took power in Cuba. From 1959-1961, Guevara was president of the National Bank of Cuba, and then minister of industry. In this position, he travelled the world as an ambassador for Cuba. At home, he carried out plans for land redistribution and the nationalisation of industry.

A strong opponent of the United States, he guided the Castro regime towards alignment with the Soviet Union. The Cuban economy faltered as a result of American trade sanctions and unsuccessful reforms. During this difficult time Guevara began to fall out with the other Cuban leaders. He later expressed his desire to spread revolution in other parts of the developing world, and in 1965 Castro announced that Guevara had left Cuba.

Following the Cuban Revolution, Guevara performed a number of key roles in the new government. These included reviewing the appeals and firing squads for those convicted as war criminals during the revolutionary tribunals, instituting agrarian land reform as minister of industries, helping spearhead a successful nationwide literacy campaign, serving as both national bank president and instructional director for Cuba’s armed forces, and traversing the globe as a diplomat on behalf of Cuban socialism.

Such positions also allowed him to play a central role in training the militia forces who repelled the Bay of Pigs Invasion and bringing Soviet nuclear-armed ballistic missiles to Cuba, which precipitated the 1962 Cuban Missile Crisis.

Additionally, Guevara was a prolific writer and diarist, composing a seminal manual on guerrilla warfare, along with a best-selling memoir about his youthful continental motorcycle journey. His experiences and studying of Marxism–Leninism led him to posit that the Third World’s underdevelopment and dependence was an intrinsic result of imperialism, neocolonialism and monopoly capitalism, with the only remedy being proletarian internationalism and world revolution. Guevara left Cuba in 1965 to foment revolution abroad, first unsuccessfully in Congo-Kinshasa and later in Bolivia.

Guevara remains both a revered and reviled historical figure, polarized in the collective imagination in a multitude of biographies, memoirs, essays, documentaries, songs and films. As a result of his perceived martyrdom, poetic invocations for class struggle and desire to create the consciousness of a “new man” driven by moral rather than material incentives, Guevara has evolved into a quintessential icon of various leftist movements. Time magazine named him one of the 100 most influential people of the 20th century, while an Alberto Korda photograph of him, titled Guerrillero Heroico , was cited by the Maryland Institute College of Art as “the most famous photograph in the world”.

Guevara then spent several months in Africa, particularly the Congo, attempting to train rebel forces in guerrilla warfare. His efforts failed and in 1966 he secretly returned to Cuba. From Cuba he travelled to Bolivia to lead forces rebelling against the government of René Barrientos Ortuño.

With US assistance, the Bolivian army and CIA captured Guevara and his remaining fighters. He was executed on 9 October 1967 in the Bolivian village of La Higuera and his body was buried in a secret location.

In 1997 his remains were discovered, exhumed and returned to Cuba, where he was reburied.

My humble tribute to “Che Guevara” Cuban revolutionary leader and one of most influential figure in world politics.