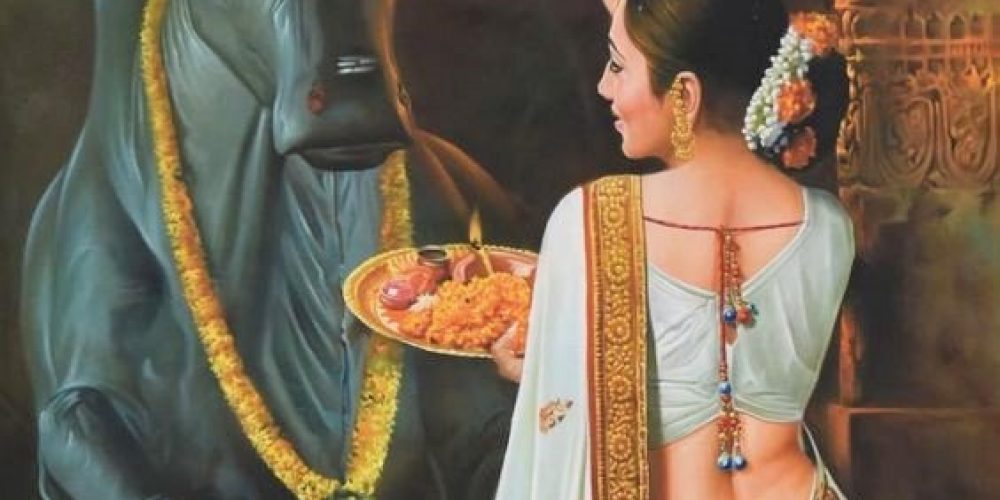 Ages ago there lived a Maharishi named Shilada who performed austere penance to please Lord Shiva to beget a son. Shilada was desirous of a self-born and immortal son. His penance continued for thousands of years. At last Lord Shiva, best Lover of devotee’s boons appeared before him as was pleased with the unswerving devotion. He offered to grant Shilada his desired boon.

Some days after receiving the boon when Shilada was ploughing his land, he found a baby placed on the plough. The baby was beautiful and radiant as the Sun. Seeing the baby, Shilada became terrified and frightened and tried to run away. At that instant, he heard a heavenly voice saying, Shilada, Take this baby, it is yours. This is the baby whom you prayed for. This divine baby will make others happy and call him, “Nandi”.

Further: Hearing this Shilada became very happy; he hugged the baby and took the baby to his hermitage. He gave his love and affection and raised the baby with utmost tenderness and care. With the passing of years, Shilada taught Vedas and imparted all types of knowledge to Nandi from medicine, dancing, singing, arts, fighting and wisdom from sacred texts. Nandi was extraordinarily, brilliant and extremely intelligent that he learned them all in less than a fortnight’s period.

One day, two powerful and great sages, Varun and Mitra, paid homage to Shilada`s hermitage when Nandi was seven years old. Shilada greeted them with great reverence and served them well with good food and hospitality. Two seers were pleased by Shilada`s gesture and blessed him. Shilada presented Nandi before them and asked them to bless his son. However, they showed sadness in their expression while blessing Nandi. Noticing this, Shilada requested them to explain their changed expression on seeing Nandi.

The sages said with deep grief, “By the force of destiny”, your son will not live for long. Horrified at hearing this, Shilada began weeping. Nandi was not disturbed at hearing this because of his unshakeable faith in Lord Shiva’s will.

He told his father with great devotion and conviction, Lord Shiva will do anything to reverse my fate. He is all powerful and is the only God who can alter one’s destiny. He can do the impossible. Nothing will happen to us by his supreme grace.

Undaunted Nandi told Shilada that he will perform severe penance to Lord Shiva and appease him through his staunch devotion and intensity of prayers. Soon he left to do penance under the waters of River Bhuvana in quest of his fate and to seek answers from the mighty Shiva. Pleased with the unswerving devotion of Nandi, Shiva appeared before him instantaneously by the tremendous powers of his faith and meditation.

Shiva asked Nandi, ” What is that you seek from me? Nandi replied, ‘ I always want to remain with you, eternally’.

Lord Shiva granted his boon and said, “Henceforth, you will stay with me. You will have a face of a bull and be the head of all my Ganas”!

Since then, Nandi became the inseparable, eternal companion and vehicle of Lord Shiva.